More Tips for Making Art Outside 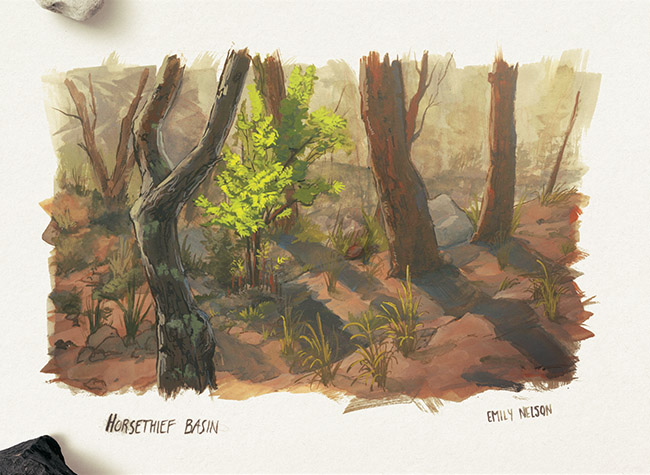 I managed to sneak in this painting while at a BBQ, sitting at a picnic table in Horsethief Basin. Also currently available as a print in the Goat Problems Print Shop.

More Tips for Making Art Outside

Or, the little details that don’t seem to be talked about much. Check out part one for information on finding your spot, Leave No Trace for artists, and building a kit.

Let’s start with some of the artistic choices you’ll have to keep in mind. At the end I’m going to get into a reason why a lot of people don’t want to draw in public: other people. But they’re not as scary as they seem, and most of them don’t bite.

The Light Changes About Every 20 Minutes

Just something to keep in mind. If you want to do a piece that takes eight hours to finish, the sun will be in a completely different position than when you started.

I find I can get away with a couple hours on a bright day and up to four when it’s overcast, but find your comfort zone and be ready to pack it in if you start fighting what you put down at the start of the session. I like to map out where the shadows are at the beginning of a long sitting and take a photo with my phone, so as the light shifts I have something to refer back to.

Do Some Warm Ups

Choose simple, easy subjects that you know you can explore without stressing about them. Go for more challenging subjects after you’ve gotten in a few minutes on the things you are comfortable with. Put on a timer and draw for a minute each and don’t stress about if it looks good or not, just get your mind in sketch mode.

Put your fingers around the edges of your paper. Holding them in place, lift your hands up to make sure everything fits. This is really more of a concern for full compositions, rather than studies of a single plant or rock form.

Okay, you got your gear and your kit. You chose the perfect spot, you have your subject and it looks amazing.

How do you work with unexciting terrain, a lack of biodiversity, or poor lighting?

High contrast lighting is best for learning how to make objects to appear dimensional.

Even or overcast lighting is great for learning how to draw graphic shapes.

Both of these are useful to learn about shape and composition, but you will get very different feeling results. One image will flatten out and become more about color and shape, the other will be more about atmosphere and creating a sense of depth.

Become a floral arranger when you’re working your composition. And don’t be afraid to add in a few elements if they are in the environment around you but not directly in your composition in order to create interest. Try to find variety in the shapes of rocks and plants. Pair thin, twiggy and reedy grasses against rambling moss and heavy stones. Find where upright cacti, soft palo verdes and rounded rocks nestle together.

Are you frustrated, just not feeling the space or what you’re seeing? Are you getting bored? Make it weird- see how alien you can make the landscape, turn it into an exploration of style. Artistic style is just a combination of how you get across what you want to show with your current skill level + how you exaggerate or downplay certain elements.

For little studies and sketches of single plants, this isn’t much of an issue, but grand vistas can become overwhelming, especially on a small page. Find an element in the foreground or the midground to anchor the image and focus most of your attention on, and let the rest fall away when it comes to detail and contrast. Choosing the midground often lends a more cinematic look to compositions as having the foreground less in focus helps push a sense of depth.

And now, the big one, the one that seems to be a huge concern for artists who are just starting out or who haven’t ventured outside out of fear of the human animal:

How to Handle Strangers

The Behaviors of People Around Artists

When You Focus on Something, They Want to Look at It

Last weekend, I was at the Grand Canyon. I did a walk along the South Rim and stopped to draw at The Abyss. I had four people come and stand right in front of me and look out across the land. Like, directly in front of me, blocking my sight from what I was working on. I was on the hiking trail, I was quite a few meters away from the public transit stop, and it’s a freaking abyss. You get a view of it no matter where you are.

People are going to pay attention to whatever you’re looking at, whether they do it consciously or not. Sometimes, they’re going to get in your way. I find this hilarious. It’s like trying to read a book around a cat. You know that cat is going to sit down on the page you’re focused on and pretend that you aren’t there.

You’ll get quite a few people that want to see what you’re working on. Most of them are going to try to sneak a peek over your shoulder, as though you don’t notice them creeping up behind you, and a few might ask some questions. If you’re shy or simply not a social person and dread talking to strangers, try reminding yourself that you’re there to work on your skills. There’s no pressure to hold a conversation or to have to be charming. In the meantime, choose quiet spots or put your back up against something until you get comfortable working in public.

People are going to think you can’t hear them. I don’t know why this is, but plenty of people seem startled if they make a comment about what I’m working on and I respond to them. I think there’s an assumption that when an artist is concentrating, they’re only focused on the work and not on anything around them.

Strangers are often apologetic for interrupting you while you’re working. About 99 percent of the interactions I’ve had are pleasant. That one percent might be a little awkward, but that’s the worst of it. I’ve also had a few people- usually kids- take a look at the drawing I just started, whirl around and loudly proclaim to their friends that they could do better than that. Hey, maybe they can, but it’s not going to stop me from working if someone with more developed skills is around.

If you don’t want to draw in public because you’re afraid of being judged, remember everyone starts learning somewhere. You’re here for you, not for other people. Don’t sweat the people who devalue you or your work, you don’t need to impress them. There’s so few of them compared to those who are interested in what you’re doing or the ones who like what you’re making that it’s better to spend your energy on the people you enjoy meeting.

Drawing as an Ice Breaker

If you’re already comfortable with people or just starting to get used to the attention that comes with drawing in public, this is actually a great way to practice your social skills and networking. Artists do need to learn how to sell themselves. I’m not saying making it a sales pitch, but talk honestly and wear your love for what you do on your sleeve. Get curious about them in return and you might be rewarded with some interesting people and fun conversations.