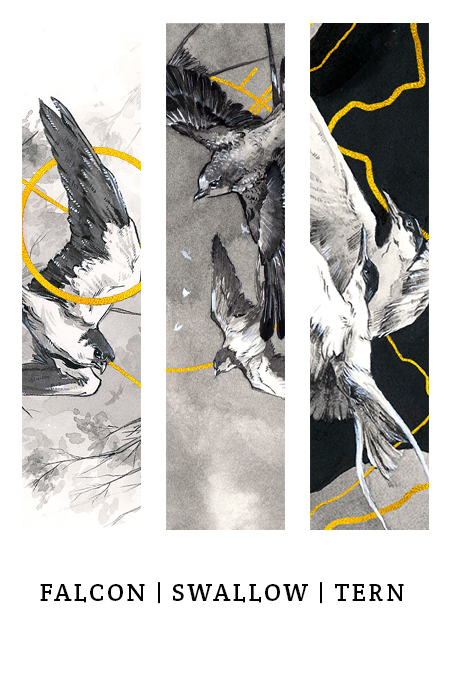 The designs in the Migration series are based off flight and migration patterns of the species featured. Purchase prints in the Goat Problems Print Shop.

(Spoiler alert, my favorite is the last one.) 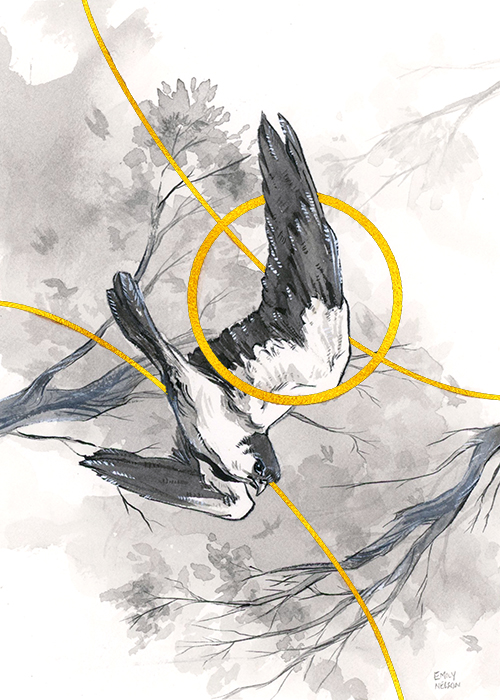 Nesting in southern Russia and eastern China, with a 22,000 km journey to their wintering grounds in southern Africa. This includes a rather harrowing leap over the Indian Ocean that takes nearly three days of constant flying to complete. They make a stop in India to feed on a yearly explosion of termites. Thousands of flying birds meet trillions of flying insects- it’s chaos. It looks like there’s more bird than sky.

There’s a human element to their story, as well. The falcons often make that rest stop in Nagaland. There, they were trapped and killed, at numbers upwards of 100,000 during their migration. Former journalist Bano Haralu helped lead the conservation charge, along with a combination of community outreach, conservation groups and governmental support. Within a couple years, the trappers had become protectors, the birds a source of local pride. The killing of Amur falcons was virtually eliminated in 2013.

The falcons were a source of food and income, seen as a boon during the annual migration. The locals chose to take an economic hit when they abandoned trapping, and hope that the money tourism brings will be able to make up for the loss. It’s an important reminder that conservation can often be a complicated subject, one that requires creative thinking and outreach. It’s also totally worth a read if you have the time, check out the links at the end for news stories related to the falcons. 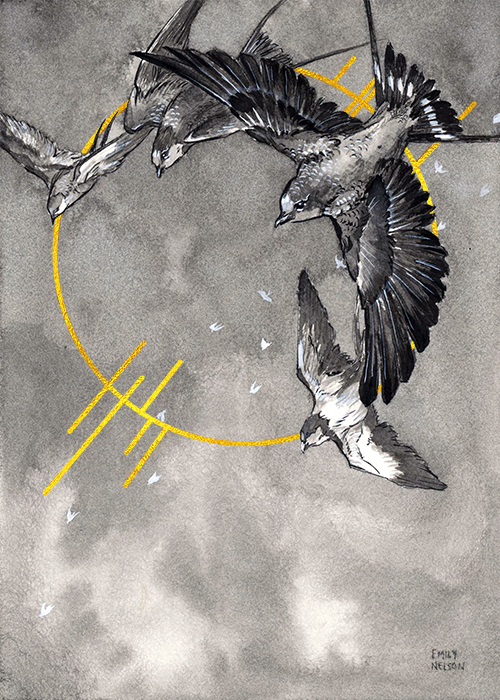 Okay, the migration might not be as impressive as the Amur falcon, but the sheer number of them and how easy they are to observe for even the most casual naturalist made me want to include them. Their adaptability is mind boggling. Barn swallows have conformed to modern human life very cozily, often using manmade structures for nest sites. They’re on every continent except for Antarctica, and there are nearly 200,000,000 of them.

They pop back and forth across the equator, summering in the northern hemisphere and wintering in the south. And they’ve been slowly spreading their nesting grounds further and further in an expansion of species territory. They hang out in colonies and have been known to make osprey buddies, cohabiting with the much larger fish-eating raptor. The osprey protects them from other predatory birds, and the barn swallow acts like a little alarm bell for the osprey.

Also, they’re great for mosquito control, and for that I thank them.

3 Trips to the Moon… and Back 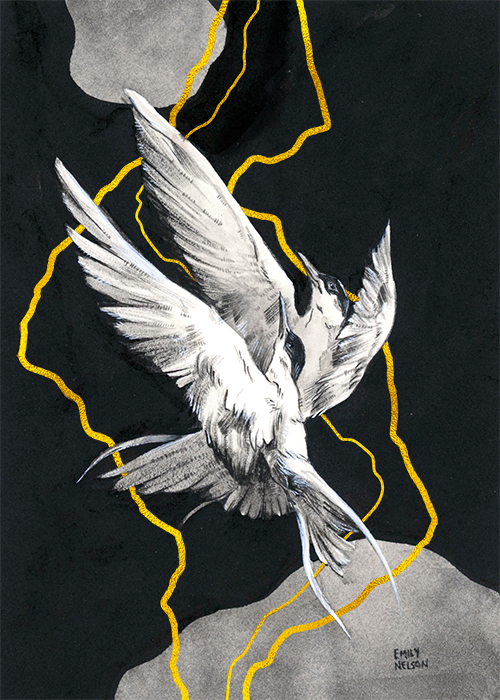 Literally, three trips to the moon and back. That’s the average an individual will fly in their lifetime. Just slightly larger than a robin, but with more than a ton of tenacity crammed into their little bodies. They’re my favorite in part because of how incredible their migration is.

The Arctic tern nests in Iceland, Greenland, and part of the Netherlands. When the summer in the northern hemisphere ends, they travel down to Antarctica, following a route over the ocean. This takes them about two months. And it’s over 70,000 km one way.

One bird has shattered the record. Fitted with a geolocator, it was tagged at 96,000 km, leaving from the coast of the Weddell Sea and flying all the way up to the Farne Islands. Their pattern can seem a little haphazard when viewed on a map, but that’s because they’re following the best weather available to them. They stick to the winds, taking advantage of their 4-oz frames and long pliable wings to keep them afloat without using as much energy. Ever watched a parrot fly? They look like they’re running late to work. This is the opposite, there isn’t a lot of frantic flapping from an Arctic tern.

I visited Iceland with friends earlier this year, and that’s where I really got to know these little guys. (The birds, not my friends.) They had just arrived for the spring, settling into the nests they made on open ground. It might seem like it would be easy for predators to pick them off. But if anything gets close, they rise up en masse and go after the intruder, like an angry bird cloud. Their nesting areas aren’t just roped off for the sake of the birds. Don’t mess with anything willing to fly so far every year.

Want to read more like this? Sign up for my newsletter for a monthly reminder of blog posts and other things happening at the studio!

Pick up prints of my work at the Goat Problems Print Shop.

Interested in how a whole community embraced the Amur falcon? Check out BirdLife International’s overview in “From slaughter to spectacle – education inspires locals to love Amur Falcon”

Read about the adaptable little barn swallow in Kenn Kaufman’s article for Audubon, “The Barn Swallow Is Slowly Conquering the World”

And follow the Arctic tern “To the Ends of the Earth” with National Geographic.